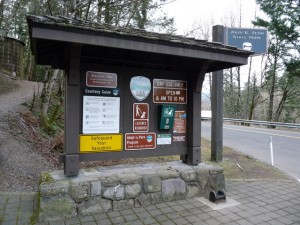 This structure, that I call a kiosk was built in 1999. I built parts of it at my shop, then transported the parts to the contractor’s shop in Vancouver, WA where it was assembled and trucked to the site where it resides now.

This was part of a job done by Lloyd Kessler Construction. A company that has done lot’s of State and City of Vancouver jobs. This job in particular; The Crown Point Job was one that lasted for a couple years and this kiosk was part of the work although was quite a ways away.

This kiosk is located on a side road parallel to I-84, East of Multnomah Falls.