Some of my clients become patrons. In this case, Lauretta and her sister Diana hired me a couple years ago to build shoji for their newly remodeled basement and create a bedroom. I blocked off the end of one room with 2 large shoji made of my favorite wood: Superior Grade Alder.
About a year ago, there was some talk between us about adding a cabinet. They had already discussed this with a cabinet maker in The Dalles OR, where they live. he was to make something that would require 2 or maybe 3 Shoji to cover part of it. It was to have some drawers.
As the months went by, we kept in touch about it and it became obvious that their cabinet maker was too busy to even do it let alone collaborate about it.
I was headed off to Peru at the time, and agreed to get together with them upon my return.
By August, I had a design for a cabinet that I would build and incorporate some sliding Shoji for the face.
They gave me the dimensions and wanted it to look similar to the existing Shoji.
I wanted it be like a Tansu but had to really back off of all the detail a Tansu would have. It would greatly increase the cost and amount of time involved.

In the end, I had to keep refining the design to make it come apart so it could be moved and I had to lighten it up or we would not be able to carry it in the house.
Originally, I wanted this heavy top and bottom. I replaced that idea with a 3/4″ plywood bottom and added a 1-1/2″ piece all around the bottom plywood to make it look thick.
The sides are made similar to the Shoji Koshi-ita panels I had used in their Shoji. The size of the kumiko grid is very similar to the existing Shoji…3″ tall by 10″ wide with 3 rows across. A formula with a very traditional look that I use often.
Lucky I designed this so it would come apart easily as there was a corner in the hallway of the house that made carrying this difficult.
Turned out the room where it was installed was such that the ends are never seen. So including the kumiko grid on the ends was a moot point.

The clients love their cabinet and were so very nice to me. Lauretta even gave me a nice tip! my kind of client! 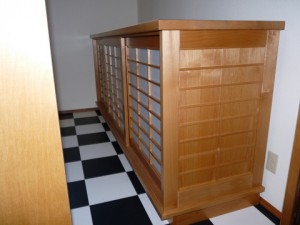